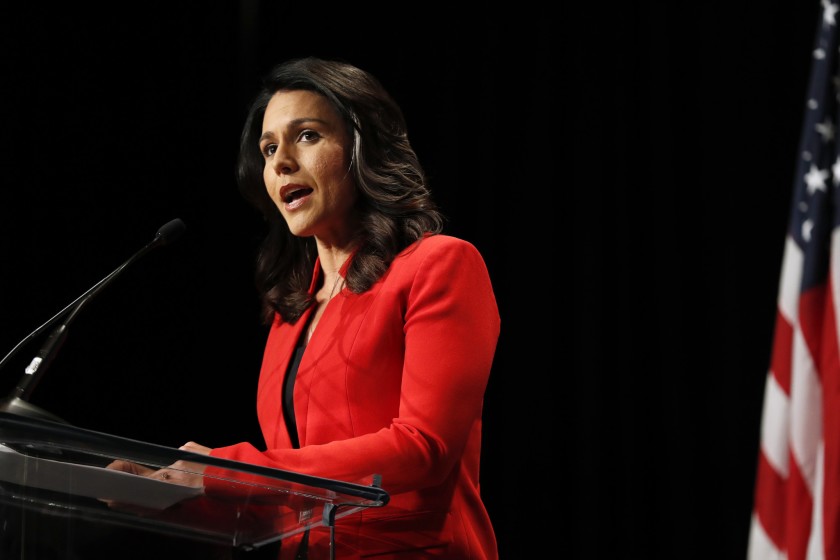 The Hawaii congresswoman said Tuesday in New York City that families who lost loved ones in the attacks “want the truth, and they deserve the truth.”

Gabbard was joined by victims’ relatives who have filed a federal lawsuit seeking the release of documents that they believe link the attackers to Saudi government officials.

She told family members gathered at a museum near the World Trade Center that it’s time to hold U.S. leaders accountable “for withholding the truth from the American people.”

Messages seeking comment were left with the U.S. Department of Justice and with an attorney for the Saudi government. Full Story

Hillary Clinton has kept a relatively low profile since her embarrassing 2016 election defeat, popping up only occasionally to make out-of-touch elitist comments that confirm why she lost. So it was somewhat surprising to hear her weigh in on the 2020 Democratic primary with a truly bizarre comment about (of all people) Tulsi Gabbard.

Clinton accused the Hawaii congresswoman of being groomed by outside forces, saying: “I think they’ve got their eye on somebody who is currently in the Democratic primary and are grooming her to be the third-party candidate … She’s the favorite of the Russians.” There is some dispute about whether Clinton meant it was the Russians or Republicans who were pushing a third-party Gabbard candidacy, but a Clinton spokesman asked about the comments replied “if the nesting doll fits”, clearly implying it was dastardly Russians.
Gabbard immediately hit back hard, calling Clinton (accurately) “the queen of warmongers, embodiment of corruption, and personification of the rot that has sickened the Democratic party for so long”. While hosts of The View backed up Clinton, calling Gabbard a “useful idiot”, others such as the Vermont senator Bernie Sanders and South Bend’s mayor, Pete Buttigieg, suggested that Clinton ought to have had some evidence before implying something so outrageous about a Democratic elected official.

But it was typical Clinton. Paranoia about Russian influence has been ubiquitous among the Clinton set since 2016, in part because it helps to explain how the loss to Donald Trump wasn’t really Clinton’s fault. Full Story

Who is Tulsi Gabbard? The progressive 2020 hopeful praised by Bannon and the right

For a promising young Democrat in 2015, one of the seemingly worst places to be was on the wrong side of Hillary Clinton, who – barring some bizarre twist – was on her way to becoming America’s next president.

Yet Gabbard, then a 34-year-old second-term congresswoman from Hawaii with both combat experience and a radiant smile, had the temerity to cross Clinton by calling for additional debates between Clinton and her opponent in the Democratic primary race, Bernie Sanders. Full Story