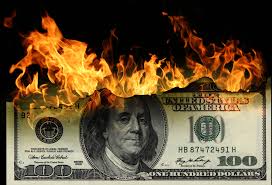 After all the money the Fed has created, one would think the masses would say “no mas”, instead they are begging for more. Do you have any idea what kind of effect such huge amounts of hot money economics will have on the markets for years to come? The naysayers can talk all they want about supply lines being backed up for months or other scenarios that they pull out of their rears. The fact is that the market will eventually discount (if it has not already done so) all those scenarios. Furthermore, these experts are severely downplaying the role of technology. Suddenly a host of businesses are going to see that a lot of personnel can be replaced with AI-based technology without interrupting the flow of goods. Replacing them will improve efficiency on a colossal scale.

Once the markets discount all the bad news, this massive mountain of money is going to flood the system, and it is going to make the Bull Run from 2009 look like Child’s play for the amount of money the Fed has already thrown into this market makes 2008 look like a stroll in the park. Officially we think they will throw north of $5 trillion; unofficially the figure could end up being north of $10 trillion.
Neel Kashkari, president of the Federal Reserve Bank of Minneapolis, said Sunday night on CBS’s “60 Minutes” that “there is an infinite amount of cash in the Federal Reserve. We will do whatever we need to do to make sure there’s enough cash in the banking system.” https://yhoo.it/2JdtRlH

And there you have it, a tacit acknowledgement that forever Q.E. is real and here to stay. When the Fed states they will do whatever it takes, you better believe this statement. Regardless of what the penguins state, the Fed is good to maintain an environment that is conducive to the hot money.
If that is not enough, then this should help you understand just what the Fed is willing to do, and by the way, we stated that they would take this route.

Struggling to illustrate the scale of the measures, T.D. Securities’ Priya Misra was left asking, “What’s bigger than a kitchen sink? “Wells Fargo’s Jay Bryson attempted to answer that question by comparing it to what the Bernanke-led Fed did during the last economic crisis: “The actions taken are breath-taking in their scope. Indeed, these steps surpass in breadth and depth the measures that the Fed created in the midst of the financial crisis a decade ago. If the Fed pulled out a monetary policy ‘bazooka’ during that crisis, then the steps it announced this morning are the central bank equivalent of ‘going nuclear.’ “ https://yhoo.it/3bqrmIT

The article is courtesy of Tactical Investor

Other sites about Hot Money Economics

What Is Hot Money?
Hot money signifies currency that quickly and regularly moves between financial markets, that ensures investors lock in the highest available short-term interest rates. Hot money continuously shifts from countries with low-interest rates to those with higher rates. These financial transfers affect the exchange rate and potentially impact a country’s balance of payments. Hot money can also refer to stolen money that has been especially marked, so that it may be traced and identified.
Understanding Hot Money
Hot money not only relates to currencies of different countries, but it may also refer to capital invested in competing businesses. Banks seek to bring in hot money by offering short-term certificates of deposit (CDs) with higher-than-average interest rates. If the bank lowers its interest rates, or if a rival financial institution offers higher rates, investors are apt to move hot money funds to the bank offering the better deal.

In a global context, hot money can flow between economies only after trade barriers are removed and sophisticated financial infrastructures are established. Against this backdrop, money flows into high-growth areas that offer the potential for outsized returns. Conversely, hot money flows out of underperforming countries and economic sectors. Read more

For international investors, there are substantial gains to be made from moving money between different countries with different interest rates.

Suppose the EU and UK both have an interest rate of 0.5%. At that time, it doesn’t make much difference whether you put savings in the US banks or EU banks.

However, if the UK increased interest rates to 1.5% then you would get a substantially higher return from saving in a UK bank. Therefore, EU investors may sell Euros and buy Pound Sterling so that they can gain more interest from their savings.

This increased demand for Pound Sterling will push up the value of the Pound against the Euro.

Even small changes in interest rates can make a significant impact on exchange rates. Increased capital mobility means it is easier to transfer money across accounts. Money can be moved from one account to another with ease. Also, the commission from buying dollars will be quite limited making it more attractive to shift accounts.

Hot money is a form of short-term investing in which investors move their money between financial markets to take advantage of interest rate fluctuations. Generally, this refers to moving money between countries and currencies. It is “hot” because it tends not to stay in one market very long.

What Is Hot Money?

The typical hot money investor looks for the highest short-term interest rates they can find in a given economy. This means that hot money investing is a short-term strategy. Money moves frequently between countries. As a result, it virtually never stays in one place for more than one year. In fact, it typically moves much more frequently. This gives the strategy its name. The money is hot because it’s considered fast-moving and not necessarily reliable. It will flow out of an economy as easily as it flowed in.

Hot money investors can approach this strategy in several ways. Most will buy currency and keep their assets in a regional bank, taking advantage of the interest rates those banks will pay. Others will buy short-term assets such as the U.S. three month treasury bill. This is a short term investment product with a guaranteed return, making it suitable for this strategy, even if a less common approach. Read more