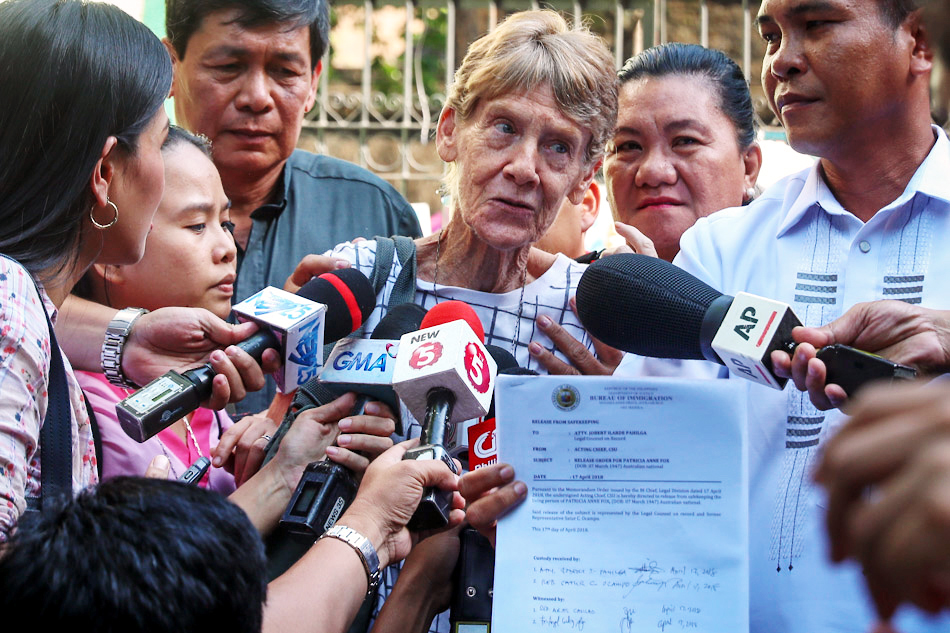 An elderly Australian nun facing deportation after angering Philippine President Rodrigo Duterte launched a last-minute appeal against the order on Friday, the deadline for her to leave the country.

Sister Patricia Fox, 71, has been accused of illegally engaging in political activism as the government cracks down on foreign critics on its soil.  Duterte, who accuses the Melbourne native of “disorderly conduct”, had the immigration service detain her briefly last month, after which her missionary visa was cancelled.

“Of course my wish is to continue my missionary work here and be with the poor,” Fox told reporters after filing her appeal with the justice ministry, which oversees immigration.  Fox had earlier filed an appeal with the immigration service, which this week upheld the deportation order asking the nun, who has been in the Philippines for nearly three decades, to leave by Friday.

However, on Thursday the immigration service’s spokesman Dana Sandoval told AFP her office “will submit to any directive that may come from” the justice ministry. Sandoval did not return calls for comment Friday.  Lawyer Katherine Panguban said Fox’s legal team was studying other options in case the justice ministry rejects her appeal.

“We will exhaust all administrative and judicial remedies available,” she said.Authorities have previously said she would be allowed to remain while her appeals are pending.Fox told AFP earlier this month she apparently angered the president by joining a fact-finding mission in April to investigate alleged abuses against farmers, including killings and evictions by soldiers fighting guerrillas in the southern Philippines. “You insult me under the cloak of being a Catholic priest, and you are a foreigner! Who are you? It is a violation of sovereignty,” Duterte said in a speech last month, apparently referring to Fox. Duterte has also launched verbal attacks against critics of his government’s narcotics crackdown, which has killed thousands of alleged dealers and users.

A perfect example of the saying “when in Rome do as the Romans do or be sent home”.  In most countries, non-citizens are treated quite harshly if they get involved in politics. Imagine what would happen in the US if Iranians came here and performed political activism.