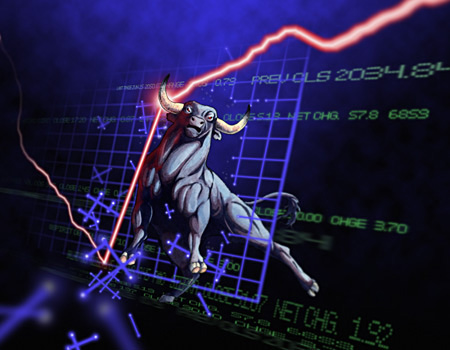 The Most hated bull Market is not ready to drop dead

Throughout this bull-run, a plethora of reasons has been laid out to indicate why this bull should have ended years ago. Mind you most of those reasons are valid, but that is where the bucket stops. Being right does not equate to making money on Wall Street. In fact, the opposite usually applies.  The Fed recreated all the rules by flooding the markets with money and creating and maintaining an environment that fosters speculation.

So why is this the most hated Bull Market

The reason this is the most hated bull market in history is because there is nothing logical reason to justify it.  In the 2008-2009 volume on the NYSE was in the 8-11 billion ranges and sometimes it surged to 12 billion. Before that, every year, the volume continued to rise, this indicates market participation. From early 2010 volume just vanished, it dropped to the 2-3 billion ranges and even lower on some days.   Hence, all market technicians and students of the markets assumed that the markets would tank as markets cannot trend higher on low volume and that is where they erred.

We were and still are in a new paradigm, just as the US uses shell companies or brokerages to mask their trades in the US, they employ the same trick in overseas markets.   The US government stepped in and started to support the market directly that is why volume dropped so dramatically. However as there were no sellers, the markets drifted upwards. Later on, they got the corporate world in on the scam.   They set up the environment that propelled corporations to buy back their shares by borrowing money for next to nothing and then using this trick to inflate their EPS, without doing any work or even increasing the profitability of the company. Mass Psychology states that the masses are destined to lose; do not follow the crowd for they will always lead you

Mass Psychology states that the masses are destined to lose; do not follow the crowd for they will always lead you astray.In between a few minor corrections were allowed to transpire almost all of which took place on ever lower volume, to create the illusion that there was some semblance of free market forces at play.

Dark Pools could be contributing to Hated bull Market Run

We also have something known as Dark Pools, this, in essence, allows big companies to purchase large blocks of shares without the trade showing up on the NYSE or any other major exchanges. In essence, it gives the government an avenue to manipulate the markets without actually leaving a footprint.  As the US can print as much money as it wants, this is a perfect backdrop to do whatever it wants.  By the way, don’t believe the hogwash that our debt is only 18.9 trillion.  There is no real mechanism in place to check how much money the US creates.  Nobody is allowed to audit the Feds books.

How to handle this Hated bull Market

The Fed is hell bent on forcing everyone to speculate, and that is why we have moved into the next stage of the currency war games and the era of negative interest rates.  Negative rates will eventually force the most conservative of players to take their money out of the banks and speculate.  This process will be akin to another massive stimulus and will provide the bedrock for another huge rally.

Make a list of stocks that you would like to own and use strong pullbacks to add to or open new positions in.  Some examples are OA, AMZN, BABA, GOOG, CALM, CHL, etc.